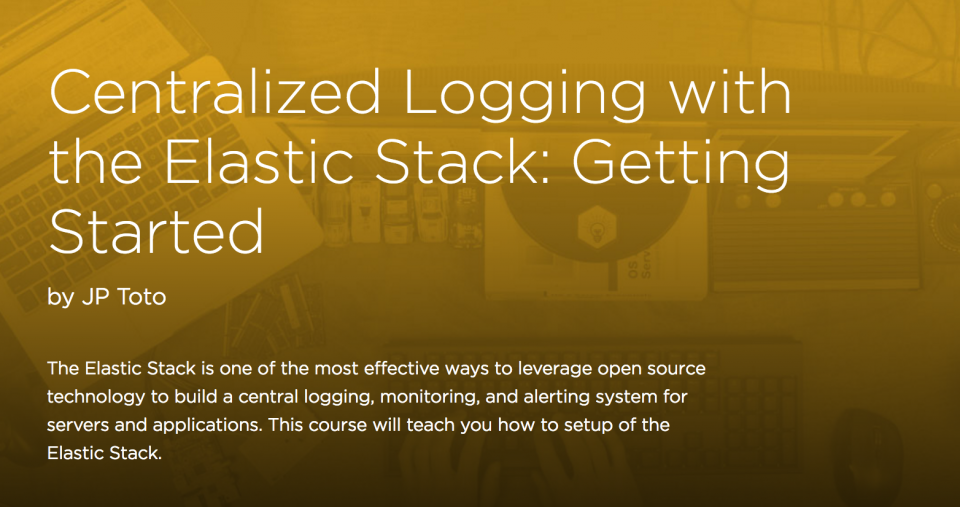 This month I launched my newest Pluralsight course, Centralized Logging with the Elastic Stack: Getting Started. If you’ve ever wanted to understand how Elasticsearch, Kibana, Beats, and Logstash all work together. This is definitely the course you want to start with.

It’s more than just learning the basics of the individual parts, though. My course will show you how to create a full fledged monitoring and alerting system, all from the open source Elastic components that make up the Elastic Stack. Each component works on Windows, Linux, or macOS so this course has something for everyone. Here’s a breakdown of what’s covered:

END_OF_DOCUMENT_TOKEN_TO_BE_REPLACED

While working on my newest Pluralsight course this past Fall, I decided I wanted an easier way to create virtual machines on my local home network. Sure, it’s easy enough to spin up a few VMs on my iMac, but at some point the limitations of 16 gb of RAM and 4 processor cores was going to catch up with me. For this course in particular, I wanted to be able to run a half dozen or more VMs simultaneously to simulate a real corporate network with all or most components of the Elastic Stack running on it. What I really needed was a cheap virtual machine host with a lot of CPU cores and RAM and some reasonably fast disks. Before getting started on my course, I set out to build a server exclusively for the purpose of serving virtual machines on my network.

The centerpiece of the server build is the Intel Xeon E5-2670 CPU. The 2670 was released in 2012 with 8 cores (16 with Hyperthreading), and a full 20 mb L3 cache. By any measure it was a 64 bit x86 workhorse. Originally 2670s were priced at around $1,500 each which is far above the ~$1000 price tag I was hoping to keep the cost of this server under. As of this writing, however, you can find them on eBay for around $80. If you combine two of them, you end up with 32 logical cores which is an awful lot to spread around for virtual machines.

END_OF_DOCUMENT_TOKEN_TO_BE_REPLACED

Working with Elasticsearch is wonderful but it can be a challenge to lasso together a coherent set of tools with which to manage and interact with your cluster. There is no one “do-everything” utility that includes 100% of the Elasticsearch query, operations, and administrative API functionality. There are a few good tools and plugins that I use, however, that round out a complete toolbox for using Elasticsearch effectively.

elasticsearch-head
The Elasticsearch head plugin is written by Ben Birch and is one of the old stalwarts that nearly everyone has used at one point to help manage an Elasticsearch cluster. It has a nice basic overview of indexes and includes some rudimentary administrative functionality like creating index aliases, running optimize, and easily viewing read-only data and cluster health. I still use this plugin pretty regularly but it has since been superseded by some more modern interfaces. It also falls down a bit, interface-wise, if you have a lot of indices in your cluster. You can install elasticsearch-head as a plugin directly from the Elasticsearch plugin command.

END_OF_DOCUMENT_TOKEN_TO_BE_REPLACED 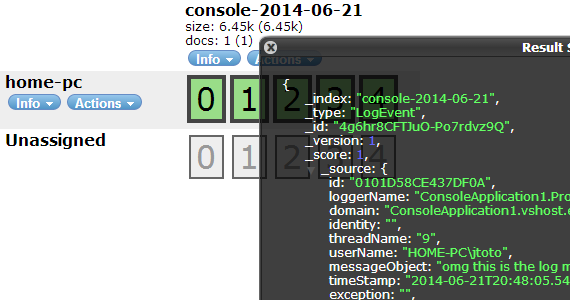 Today I made a small update to log4net.Elasticsearch so that users can optionally choose to have new indexes created each day. This was suggested in a Github issue and I think it’s a good idea. Many Elasticsearch indexes are managed on a rotating basis. It’s simple to create index aliases so that if any log readers or applications are reading directly from the Elasticsearch index, the index alias can be established nightly with a routine API call.

to your usual application connection string and the logger will take care of the rest. You can see an example of the setting on the sample App.config file in the Github repository.